The Koenji Awa Odori is the Tokyo version of a large dance festival that originated in Tokushima City approximately 400 years ago. It takes place in various cities across Japan as part of the O-bon festival, but the Koenji Awa Odori, as the name suggests, plays out in the beautiful Koenji District of Tokyo City. Each year during the last weekend of August, over a million spectators gather here to watch thousands of participants dance through the streets. Here we will reveal when, where, and how to attend this lively dance festival.

This video of the Awa-Odori Dance Festival is owned and created by Tokyo Omotenashi Channel.

Each year around 10,000 to 12,000 dancers and over a million spectators gather in the narrow shop-lined streets of Tokyo’s Koenji district. Dancers are divided up into groups known as Ren, that consist of male, female, and children’s groups. 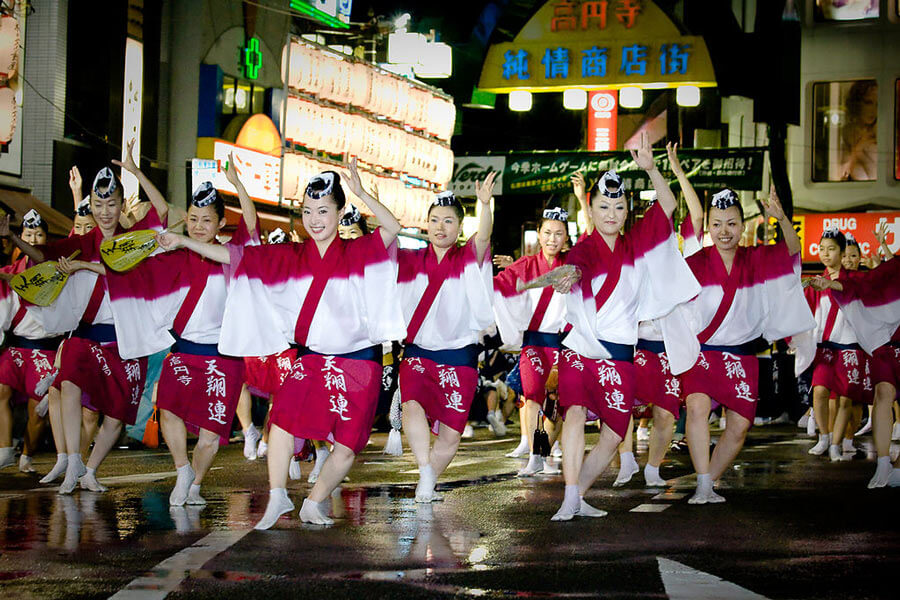 The dance is a competition, and participating groups are made up of various local community members, local schools, and even teams from different parts of Japan. Festivities kick off at 17:00 when temperatures are cooler and consists of each group, or reno, to dance down the streets to the music of flutes and taiko drums.

As with all Tokyo Summer Festivals, there are lots of drinking and eating, so feel free to indulge. The Koenji Awa Odori comes to an end at 20:00 – 3 hours after it initially started, so if you plan on attending but don’t want to be there for the entire 3-hour duration, then be sure to catch the best part which is the ending. In the end, all 10,000 to 12,000 dancers dance together as a grand finale, a sight well worth beholding.

From where to watch

Those who wish to attend this lively and fun event will have to watch from the sidewalks. Luckily most of the streets are narrow, so you will be able to see the action from up close. Keep in mind that you will be competing with over a million other spectators for sidewalk space, so it gets pretty crowded. Therefore, if you want to be up as close as possible, you should get there before the dance festival starts, which is at 17:00.

Also, be sure to check the weather forecast in case you need an umbrella because the festival continues no matter even if it rains.

The history of the Awa Odori in Tokyo

The original Awa Odori traces its history back 400 years ago in Tokushima City – which is still ongoing there today. Koenji Awa Odori, however, has only been celebrated for over 60 years as part of the much larger national O-bon festival.

Next year’s event (2020) will be its 63d year. It started in 1957 as a means of stimulating economic growth in the then financial stagnant Koenji District of Tokyo. The plan worked as today, around 1,200,000 spectators gather in this tiny little district during the two days of the festival.

Top 10 Okinawa Beaches
The Okinawa prefecture consists of 150 islands and is home to the best beaches in Japan. The busy season is between April and October and th...
The Best Bonsai Soil Mix
Choosing the right soil is crucial for the success of your bonsai tree because the correct soil provides your tree with all the essential mi...
Martyrdom of the 26 saints
No other Japanese prefecture has received as much Western influence as Nagasaki since it was the only area of Japan that allowed foreigners ...
Okinawa Castles
Okinawa, formerly known as the Ryukyu Kingdom, existed as a separate and independent nation-state from Japan. The Kagoshima Domain from the ...
Sushi Making Classes in Tokyo
The art of making sushi takes years to master. The basics doesn’t require such a demanding level of commitment because there are a number of...